L’Entente Cordiale No.2796 – was founded in 1899 and one of the originator was the Grand Master the Prince of Wales also known as the ‘Peacemaker’ who in 1904 as King Edward VII contributed to the Entente Cordiale between England and France.

The Lodge was consecrated on 30th January 1900 at the Regent Masonic Hall by The Grand Secretary Sir Edward Letchworth.

The first regular meeting was on the 5th March 1900 when there were three initiates.

Lodge L’Entente Cordiale, which is composed of French residents in London, held a successful installation meeting at the Cafe Royal on the 2nd December 1901, the retiring Master being Bro. E. Roehrich, D.G.D. of C.

The officers for the year were duly appointed and invested. The W.M. announced his intention of serving as a Steward at the next Festival of the Boys’ School, and the I.P.M. made a similar announcement with regard to the R.M.B. Institution. The lodge at once voted a sum of ten guineas as its contribution to each of the Stewards’ lists. 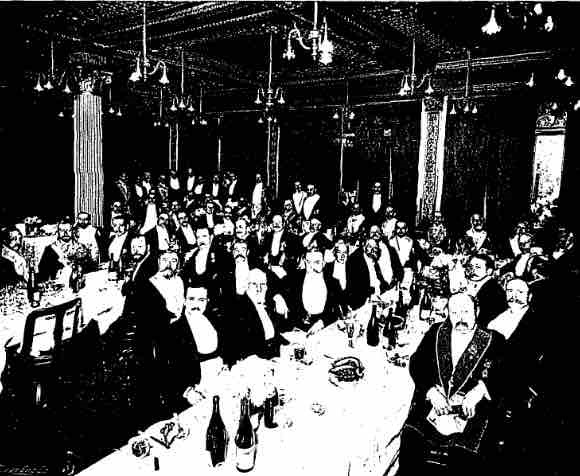 A banquet followed. The usual loyal and Masonic toasts were duly proposed and responded to, that of “The Visitors” being acknow­ledged by the W. Master of the Old Masonians Lodge, which is composed of the Old Boys of the Masonic School, and by Bro. H. C. Richards, K.C., M.P., in a telling little speech, which he gave in French, and which was all the more appreciated as coming from a member of the English Parliament.

In 1903, W.Bro.Major John.W.Woodall, Grand Treasurer of the United Grand Lodge of England and 16 members of the Italian, French and German speaking Lodges, met in London to discuss forming a Club with the idea of promoting peace in the world through the Brotherhood of Freemasonry They founded the International Masonic Club, with the declared object of uniting more closely the several different foreign speaking Lodges working in London under the English Constitution and to seek to contact Lodges abroad recognised by the United Grand Lodge of England so as an exchange of ideas and visits could be arranged.

The 7th December 1908 at the installation of the Master Elect, the Lodge was honoured by the visit of the Pro Grand Master, Lord Ampthill, together with a number of Grand Lodge Officers. Lord Ampthill made a speech all in French;

“I have learned that the Loge “L’Entente Cordiale” justified her name not only on a political vu point but also on a Masonic point. United Grand Lodge of England was now proud of the birth of a daughter that at the beginning had caused her a few anxious moments.

On the 10th March 1910, The first meeting of the International Masonic Club consisting of six Lodges, took place and was attended by the Pro Grand Master, R. W. Bro. Lord Ampthill and the Deputy Grand Master R. W. Bro. Sir Fredrick Halsey and some 500 members and visitors, who afterwards dined at the Connaught Rooms. It was at this meeting that the name changed to Anglo-Foreign Lodges Association, better known as AFLA.

On the 15th of May 1913 the Lodge was the host of the fourth annual reunion of the Anglo-Foreign Lodges at Freemason’s Hall. For the first time, following L’Entente Cordiale initiative; United States of America, Switzerland, Belgium, Spain, Austria & Algeria were represented. A truly cosmopolitan event “The Freemason”.

The Lodge celebrated its 25th anniversary on the 30th January 1925 in the Grand Temple with the assistance of R. W. Pro Grand Master Lord Ampthill. The Lodge gave 100 Guinees to the Masonic Million Memorial Fund. 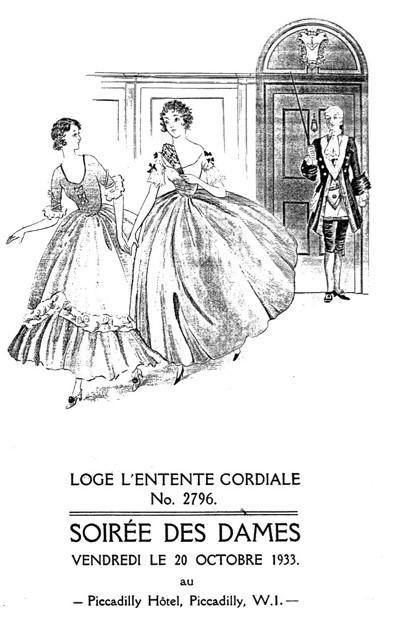 Ladies Night at the Piccadilly Hotel took place on the 20th of October 1923.

Following the end of the War, the Brethren celebrated the Victory in the Connaught Rooms together with the Brothers of Loge La France et Lodge of Reunion & Fellowship. Despite the scarcity of supplies, the Brethren dinned with Turple Soup, Chicken Financiere and Fresh fruit compote.

The 50th Anniversary celebrations took place at the Café Royal on the 30 January 1950, and despite years of restraint the menu was excellent ; Delice de sole Entente, Poulet de Surrey cocotte Bucheronne, petits pois et pommes mignonette, followed by a Timbale de peche Royale and a gateau givre Cinquantenaire, and, of course, Moka.

The Centenary meeting, on the 12th February 2000, was held at the Royal National.

At Loge L’Entente Cordiale, we have an experienced team of Masons who will guide you through your Masonic career. You will be offered as much help and advice you need so that you can get the most from your membership.

Loge L’Entente Cordiale ritual is based on that demonstrated at the Emulation Lodge of Improvement, and conducted in French.

It is also a founder member of the Anglo Foreign Lodges Association (AFLA) which brings together International Lodges working in London.

A pub supports its local community

A Tale of Two Chapters – a novel ‘link’

Cookies are very small text files that are stored on your computer when you visit some websites.

Use the slider below to see the different types of cookies you can choose to allow.

Drag the slider across to change your cookie settings

This website will:
This website will not:
Saving option...
Cancel Save and Close
Find out more about Cookies
For your new settings to take effect, this page will automatically refresh when you click "Save and close".